Many Goldendoodle pet owners are encouraged to micro-chip their pet to help recover them in the event they become lost or stolen. As a breeder for 11+ years, we always encourage pet owners to have their puppies micro-chipped. However, some states are now mandating mandatory micro-chipping. I had never heard of this until the other day when I came across a website that seemed to be written by a canine activist. Their website seemed to be geared towards canine politics, if you will, but I found it interesting all the same. The site goes on to say they believed that mandatory microchipping was an invasion to the privacy and civil liberties of all dog owners and that such laws would have a great impact on the lives of everyday pet owners, especially those with targeted breeds like the Pitbull, Rottweiler, Doberman, etc.

The article goes on to say they believed that mandatory microchipping laws would force dog owners to chip their dogs. That this would allow the local government to track and monitor dogs and their owners. Honestly, I don't see what the problem is but maybe I'm just not a very political person and I have nothing to hide. Personally speaking, it seems that every time one hears about a child or person being attacked by a dog, nine times out of ten, it was caused by a Pitbull. Too many people are using Pitbulls and Rottweilers as fighting dogs and it's a known fact gangs use such dogs to protect their property because they also have illegal things going on. Of course the issue isn't just a problem with the dogs mentioned. It is the violence and the type of people who own these dogs that are causing the problems.

The other issue politically charged animal rights activists say are problems with the micro-chip is that the chips themselves cause cancer in the dogs who have been chipped. I don't know if they are only basing this theory on one article but supposedly a 9-year-old male French Bulldog was examined by a veterinarian for a subcutaneous mass located at the site of a microchip implant. Cytologic examination of the mass was suggestive of a malignant mesenchymal neoplasm. The lymphoid cells were positive for CD18 and CD3. No aluminum deposits were detected by the aurintricarboxylic acid method. A diagnosis of fibrosarcoma morphologically similar to feline postinjection sarcomas was made after conducting many tests. Fibrosarcomas at the site of injections have been reported in dogs and ferrets. Furthermore, neoplastic growth at the site of microchip implant in dog and laboratory rodents has been described. But who is to say that indeed this cancer was caused by the chip? Sure it seems suspicious, but how many other dogs and cats were found to have the same type of cancer after having a micro-chip implanted? Enough to convince me that we should now stop micro-chipping our pets? Should we all have to worry that micro-chipping our family pets will somehow give the government more access into our lives?

Or are these fears just suggested by paranoid activists who believe we should be concerned about why states are now making it a law to micro-chip our family pets? Is there a difference between a sex offender and a dog owner? Not according to those rallying a petition to stop states from making micro-chipping your pet mandatory! While I disagree with this notion, many have the same beliefs that its nothing more than the government stepping further into our lives by keeping pet owner information stored in their government databases. Called "spy chips" by most activists, mandatory micro-chipping of breeding dogs and family pets have been passed by Florida and Texas. Other states are proposing the same laws be passed, including New York.

Over all, I have to say that I believe having your family pet as well as breeding dogs micro-chipped is a good thing. For one, its helps the breeder identify their breeding dogs if they have dogs who are nearly identical in appearance and size, to include the same gender. It helps identify the dog if a pet owner's dog should be lost or stolen. A micro-chip will help the pet find its way back home if he or she somehow gets away from its home and is picked up by animal control or a humane society or some other service that has micro-chip scanning devices. I personally own a micro-chip scanning device and use it if I find a dog wandering the streets. Collars can be removed but a micro-chip is forever! A micro-chip will actually outlast the life of the dog and the capsule is very, very small. About the size of a grain of rice. Many breeders and dog owners micro-chip their dogs and cats voluntarily. I don't think we should become so paranoid as to believe that the government is now going to watch over us through our pets. Micro-chipping is becoming very popular not only with animals, but for credit cards and humans alike. The following article was written about the plans of American Express:

" The top brass at American Express, chagrined at the discovery of its people tracking plans, met with CASPIAN (Consumers Against Supermarket Privacy Invasion and Numbering) last week to discuss the issue. One outcome of the meeting was a promise by American Express to review its entire patent portfolio and ensure that any people-tracking plans be accompanied by language requiring consumer notice and consent. The meeting was organized after CASPIAN called attention to one of the company's more troublesome patent applications. That patent application, titled "Method and System for Facilitating a Shopping Experience," describes a Minority Report style blueprint for monitoring consumers through RFID-enabled objects, like the American Express Blue Card.

According to the patent, RFID readers called "consumer trackers" would be placed in store shelving to pick up "consumer identification signals" emitted by RFID-embedded objects carried by shoppers. These would be used to identify people, track their movements, and observe their behavior."

The article goes on to discuss further about the issues of using such tracking devices and while some were indifferent to the idea, some were greatly opposed. Just another method of big brother stepping in? The VeriChip implant is a glass encapsulated RFID tag that is injected into the flesh to uniquely number and identify individuals, or pets for that matter. The tag can be read by radio waves (scanners) from a few inches away. The highly controversial device is being marketed as a way to access secure areas, link to medical records, and serve as a payment instrument when associated with a credit card or pre-paid account. But is this all hyped up worry like what we saw when the "bar code" was introduced? Many people opposed the bar code on items we purchase in supermarkets and stores, but we seem to have now embraced the bar codes, not giving them a second thought any more. I think after all the fuss dies down, the same will be said about the micro-chip implant. Once something of the future, the micro-chip is finding its way into the market for all sorts of useful reasons. 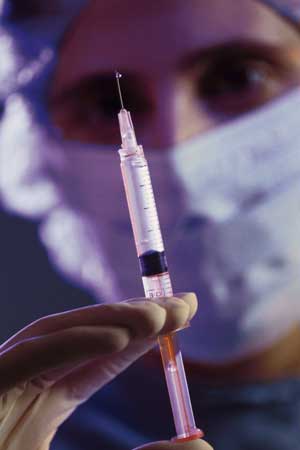