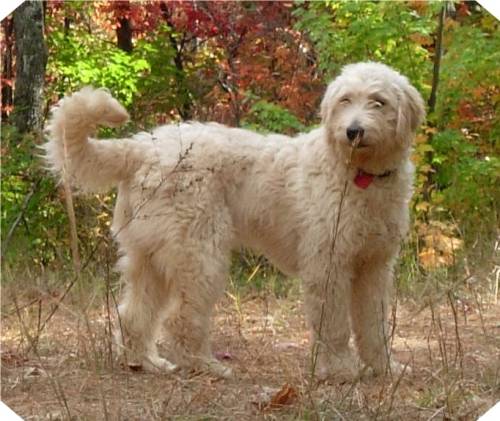 Welcome to the World of Goldendoodles! This Goldendoodle wiki will help you learn everything you ever wanted to know about Goldendoodles and then some!

WHAT IS A GOLDENDOODLE?

While there are many fanatic Poodle & Golden Retriever breeders and owners out there who put down any type of hybrids, the truth of the matter is that the Goldendoodle is the BEST KEPT SECRET FOR A FAMILY PET! This wonderful hybrid is the best mix anyone could have ever asked for and to this day, their popularity continues to increase. Perhaps it is out of fear that the lovely Goldendoodle will take over and out-rank the Golden Retriever when all is said and done.
Although the Goldendoodle is very adorable, cute, playful and silly....
there will always be those people out there who will put them down and call them "MUTTS" or try and create a reason for them not to exist.

Goldendoodles with a similar temperament as the Poodle dog can be somewhat of a barker; have a higher drive and may not work out for those with young children or who have not ever owned a purebred Poodle. A Goldendoodle that has a personality/temperament similar to the Golden Retriever is more outgoing and more accepting of strangers and usually work out for those who have children of any age.

Naysayers can fuss all they want about this lovely hybrid dog and how interesting to find out that in 2009, the AKC board of directors decided to allow the Goldendoodle and Labradoodle become registered hybrids with their kennel club! I predicted this would happen back in 2007! AKC laughs itself all the way to the bank! I predicted in 2007 that as soon as the popularity rose with the Goldendoodle hybrid, AKC would do an about face and incorporate the designer dogs into their club...and lo and behold, they did!

The GOLDENDOODLE is here to stay and has increased in popularity since they began in the United States in 1997.


Find more articles about the Goldendoodle by visiting: